The images used in this article have been embedded via Flickr and are copyright their respective owners. Click on an image to be taken to the Flickr page. Lead Image by Tomohisa

If you want to shoot a concert these days you can just get outta here with any ideas of taking your ‘professional’ camera into the show with you without a press credential. Setting aside compact digital options, one idea you may consider is an old film point and shoot paired with a quality high-speed black and white film.

These cameras are small, compact, and most likely won’t be prohibited from an event. We have compiled a list of five film point and shoot cameras that we think have the chops to help you capture some amazing concert imagery from the crowd perspective.

Starting off our list of great film point and shoot cameras to consider is the Yashica T series, namely the T3, T4 or T5 model cameras. These are some of the most well-regarded film era point and shoot cameras around, featuring a fairly fast 35mm F/2.8 Zeiss lens. The Yashica T3 originally was also distributed as the Kyocera T Scope, and this is the model that we would likely suggest out of the three options thanks to its fast lens. The T4 and T5 also make great point and shoot film cameras, but they feature a slower F/3.5 aperture lens and we feel the faster F/2.8 lens on the T3 makes more sense for concert photography where the light will almost definitely be low. 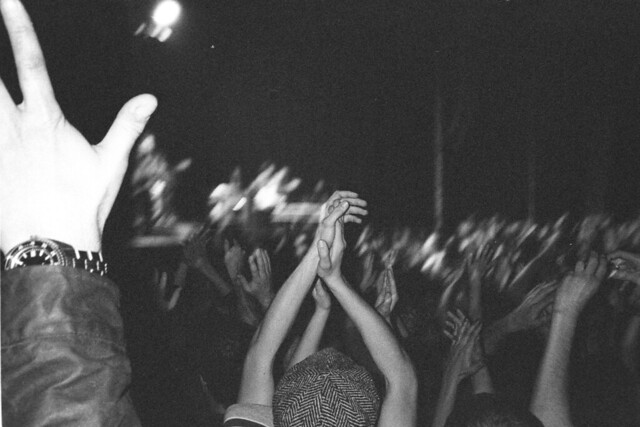 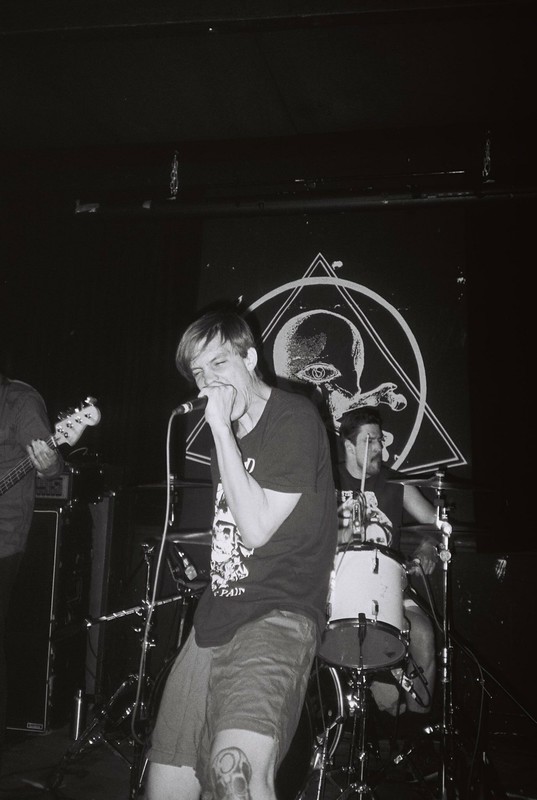 The Hexar AF 35 is an all metal film era point and shoot with a killer 35mm F/2 lens. Released by Hexar in the 1990s the AF 35 is a little larger than most of the other cameras on this list, but given its feature set, we feel that it is worth the extra bulk.

Beyond its fast F/2 aperture lens, the Hexar AF 35 comes complete with an infrared AF system, program and aperture priority exposure modes, a hot shoe for attaching a Speedlight, and a single shot automatic film advance.

AF on the Hexar AF 35 was good for the time, but by today’s standards is rather primitive. In AF mode you get one primary focus point and a small light in the viewfinder turns red when the camera detects that focus has been achieved. Your results at a concert may vary, but the camera is also manual focus capable, which is a nice feature on such a small camera.

Later versions of the camera came with a manual exposure mode (they all had manual exposure) that also included spot metering. This could be a nice feature at a concert where the camera will think it’s too dark. Meter for a bright spot like the skin on a singer and the camera won’t get spooked. 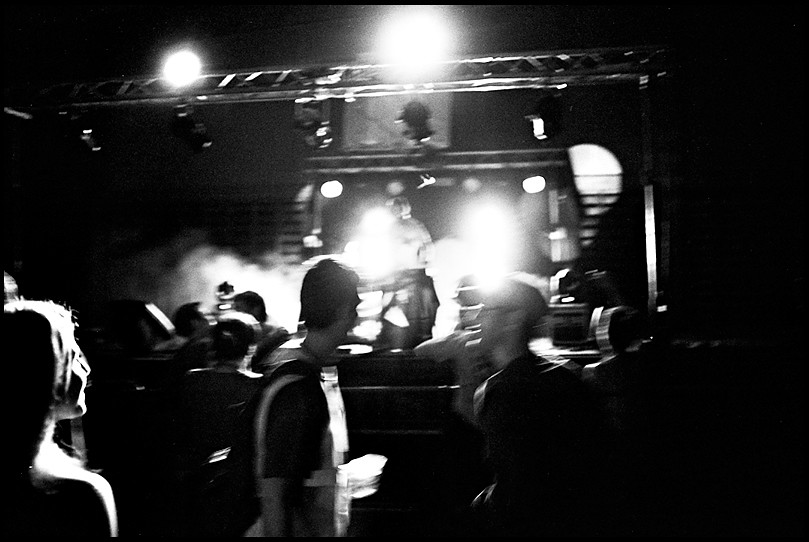 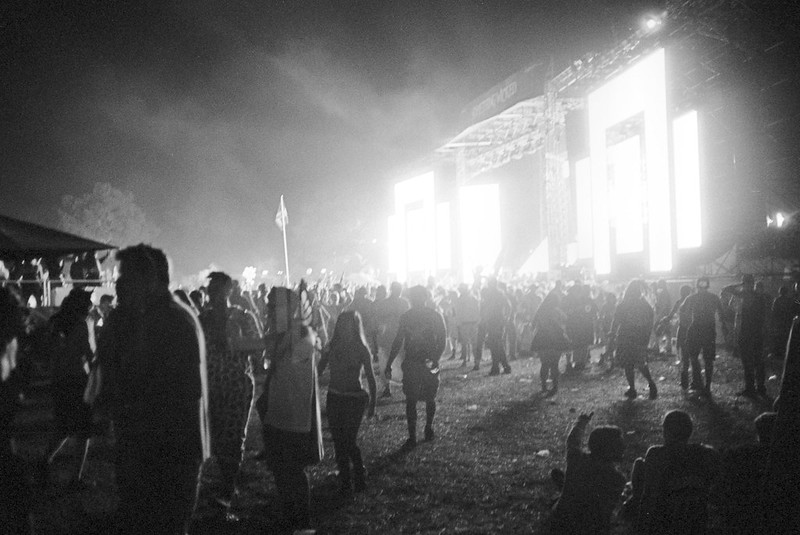 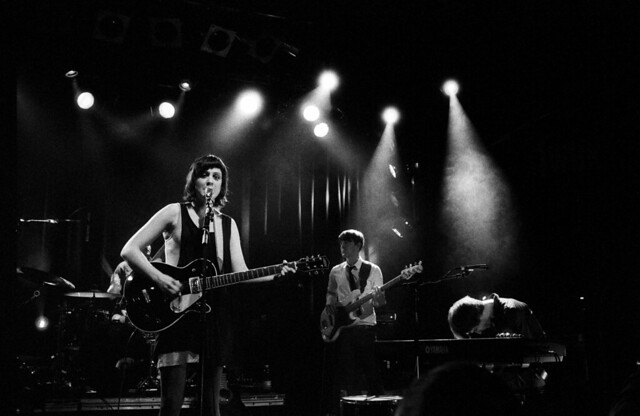 Released in the early 1990’s by Kyocera under the Contax brand, the T2 was the second camera in the Contax T series of high-end point and shoot film cameras. The unit features a 35mm F/2.8 Carl Zeiss lens that while not as fast as the Hexar, is still plenty fast for concerts with the help of an appropriately speedy film.

The Contax T2 also includes some other unique (for the time) features for a point and shoot camera. Things like -2 to +2 EV exposure compensation, manual focus control, and aperture priority. Beyond its features alone, the Contax T2 is also a true rangefinder design, meaning it is not just styled to look like a rangefinder.

The Contax T2 is a widely regarded point and shoot, not just for its Contax brand name, but as well for its lens. The optics on this lens are thought to be some of the best ever put in a film era point and shoot camera. Optically you may be sacrificing a little with the F/2.8 aperture, but the design of the lens is superb, providing excellent image quality which we feel is reason enough to pick one of these up if you can. 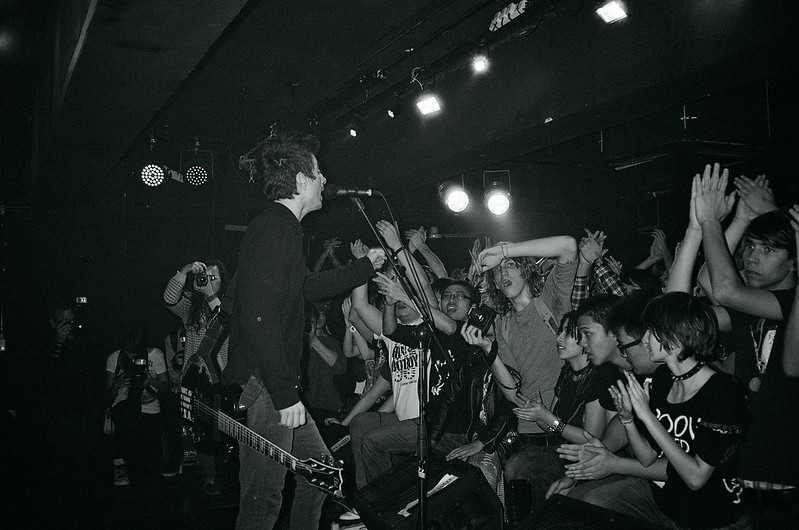 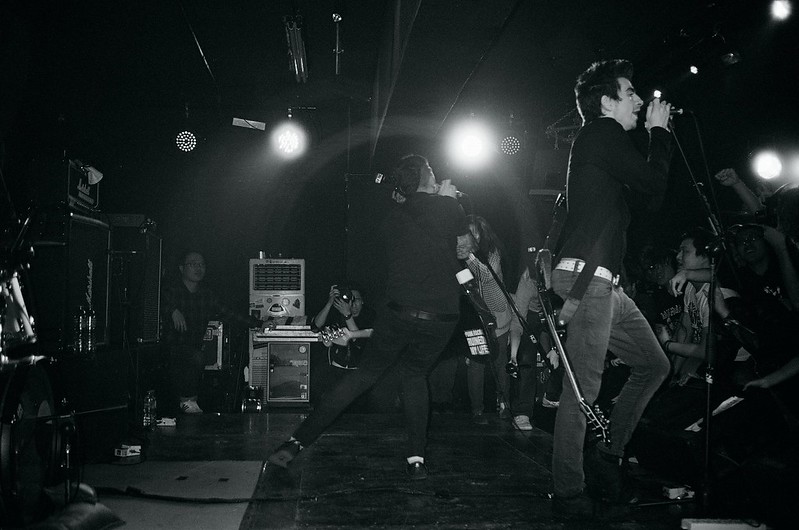 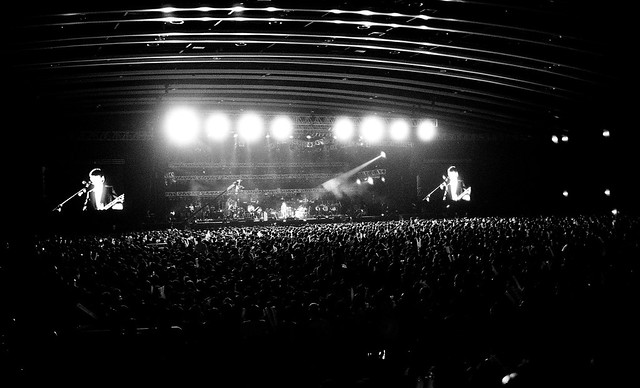 This is the oldest camera on this list, and no doubt has the least amount of features, but in terms of small, compact, inconspicuous point and shoot film cameras, this is a great option. Its 35mm lens features a F/2.8 aperture made up of 6 elements in 5 groups and also sports a leaf shutter. The lens itself is protected by a little sliding door cover which helps keep the lens looking and performing well even after all these years.

The XA also makes use of standard (for the time, and still easily accessible) LR/SR 44 batteries, helped by the fact that there are very little electronics in this unit due to its age.

Flash can be a nice accessory at shows where it is allowed, and the XA also features some great attachable flash units which perform well if you can get your hands on a working unit. 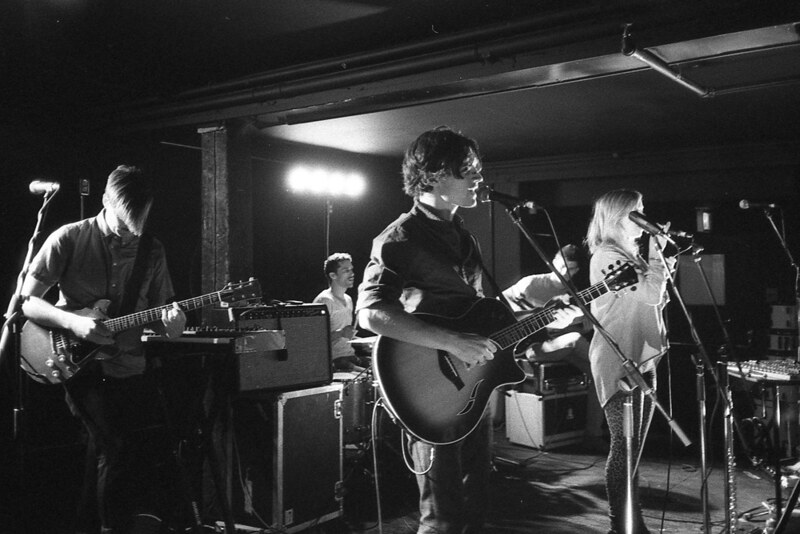 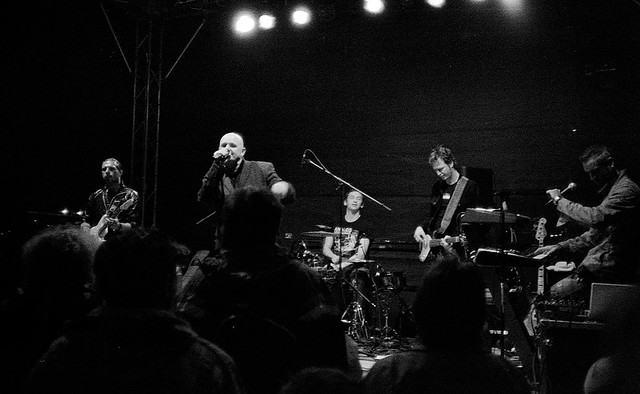 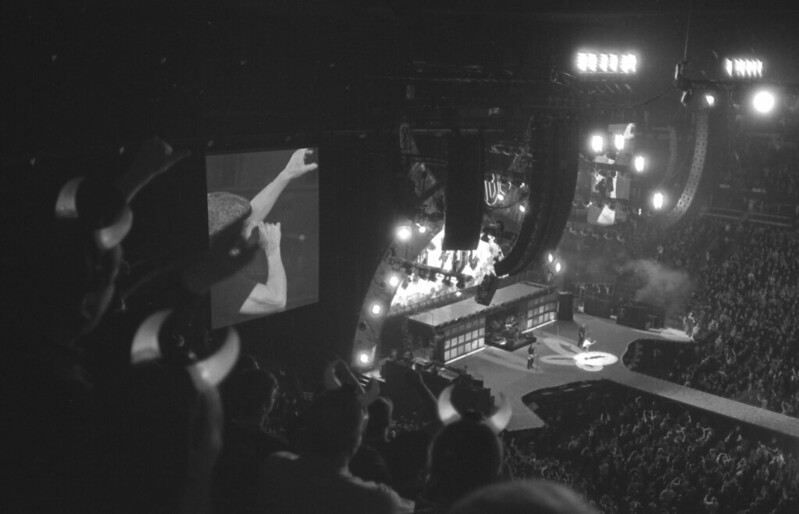 Very similar to the T2, the Contax T3 is a rangefinder style film point and shoot that features a 35mm Zeiss lens. The lens in the T3, while still a 35mm F/2.8 like its older T2 brother, does feature a reformulated Zeiss design which brings better image quality and performance.

The Contax T3 also features a sleeker more refined design, but that really should be expected given that it is the newer camera. This is one of the smallest and most compact 35mm film point and shoot cameras ever made and while you do have some compromises, the performance and convenience here is still talked about by film enthusiasts. 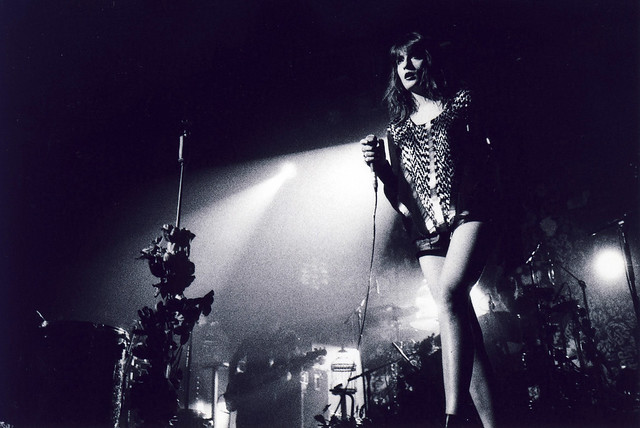 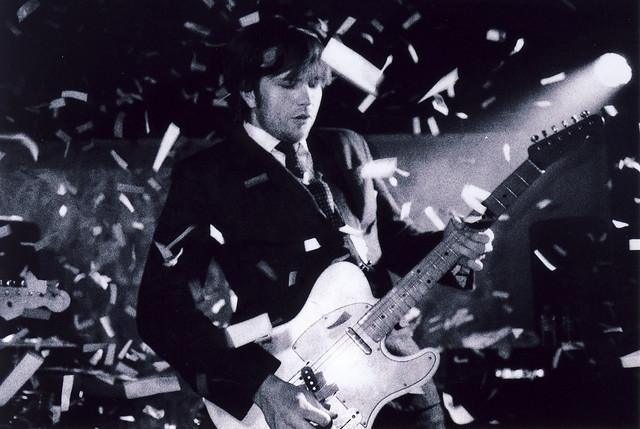 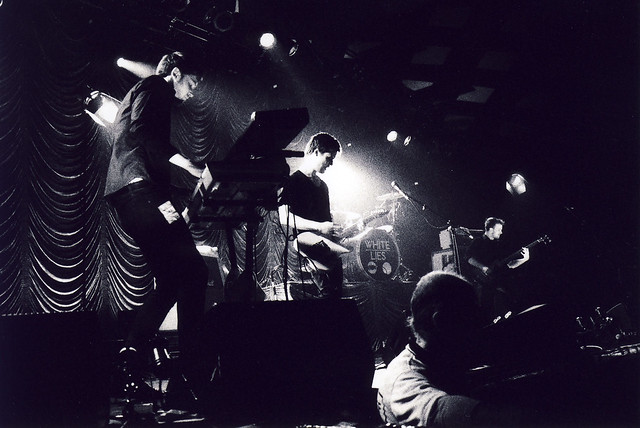 Some other things to consider when looking into using a point and shoot film camera for concert photography is that you will not have a continuous AF drive mode. These are all, the ones which do have AF, utilize simple single-point AF systems. In other words, no tracking or anything like the AF you are used to these days. This shouldn’t be all that hard to get used to, but it is worth noting for those who are unfamiliar with the rudimentary AF systems of the film-era.

Many of these cameras can be found fairly inexpensively through used sites like KEH, and Criagslist, as well as auction sites like Ebay. Some though, will still command a pretty hefty premium given their status and legend in the film enthusiast community.

Finally, just remember to pair these cameras with an appropriate 35mm film for concert photography, and have some fun. You really can’t go wrong with any of the cameras on this list.